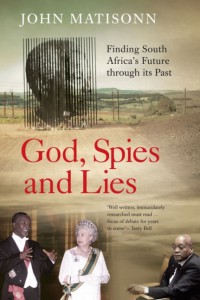 “For a couple of months in the near perfect summer of 1990/1991, Jacob Zuma came to stay in my house in Norwood, Johannesburg… Twenty five years later, my former house guest has all but morally bankrupted Nelson Mandela’s ruling African National Congress. President Zuma’s vision-free leadership, corrupt personal behaviour and attempts to use his political power to distort the judicial system render him no better than Italy’s corrupt bunga-bunga partying ex-prime minister, Silvio Berlusconi.”

So begins GOD, SPIES AND LIES, the most explosive insider’s account since Mandela came to power of how South Africa got here — and how things went wrong.

It takes you into the room with Nelson Mandela and Thabo Mbeki, into the Oval Office of the US President and the British Prime Minister’s Chequers country estate, as the fate of southern Africa was being set before and after 1994.

Among its revelations are:

How Nelson Mandela studied the Afrikaner Broederbond to end white rule at the same time as he set up the military wing, Umkhonto we Sizwe in 1961.

The story of the apartheid spy who fooled the white liberal elite.

What it would take to get the country back on track

JOHN MATISONN has had a bird’s eye view of South Africa’s progress through apartheid and democracy. As a political correspondent, foreign correspondent and one of the pioneers of democratic South Africa’s free broadcasting environment, he interacted with every ANC leader since Oliver Tambo and every government leader from John Vorster to Jacob Zuma.

Now for the first time this seasoned and erudite insider reveals the secrets of a 40 year career observing the politicians, their spies and the journalists who wrote about them. As a patriot, he argues that the way to a better future can be found through an unvarnished examination of the past.

If you read one book on South Africa, make it this one.